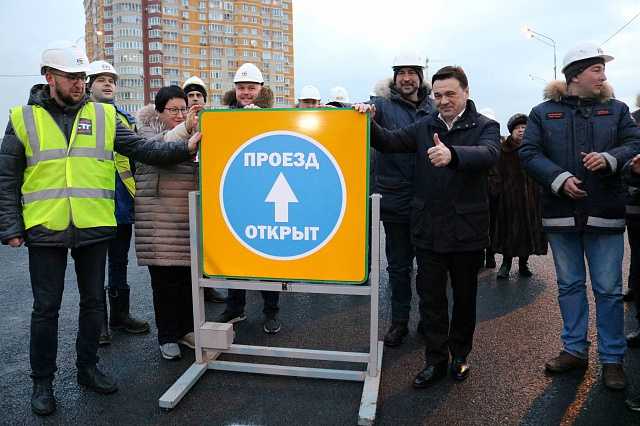 JSC Stroytransgaz has completed the construction of the first multilevel startup junction facility at the intersection of Volokolamskoe and Ilyinskoye highways in Krasnogorsk. Traffic on the new route was launched on December 29, 2018. At this phase, construction of the right side of overpass on the main transit flow of Volokolamskoye highway through Riga direction railway section, rearrangement of utilities and rectification works of the Banka river have been completed.

“It was a big problem in Krasnogorsk. The traffic used to be almost paralyzed here. Today we’ve opened the first phase of traffic junction, it would allow for a significant decrease of traffic density. The junction will be finally completed in September 2019, with additional access ways constructed. I hope the situation will change ultimately”, Moscow Region Governor Andrey Vorobyov emphasizes, “I’d like to thank the developers for diligent compliance with the work schedule. Krasnogorsk residents have long been waiting for this crossing and sending relevant requests to us. We will continue fighting traffic jams in the areas of highest concern.”

The first startup facility is a 358 m long crossing. It rests on 12 reinforced concrete supports constructed with over 5 thousand tons of steel structures and ca. 15 thousand cubic meters of concrete. The facility and its approaches are furnished with lighting and barriers. The Crossing was constructed with advanced materials to increase the period between overhaul.

Construction of a multilevel traffic junction in Krasnogorsk is implemented in three stage. All works are progressing according to the schedule. About 330 experts and 80 machine units are operating at the facility at all times.

The final completion of the construction is scheduled for 2019. The facility will be ca. 9 km long, with six lanes along Volokolamskoye Highway and four lanes in direction of each of Ilyinskoe Highway and Penyaginskoe Highway. Expected traffic capacity of the junction will comprise ca. 80 thousand vehicles per day.