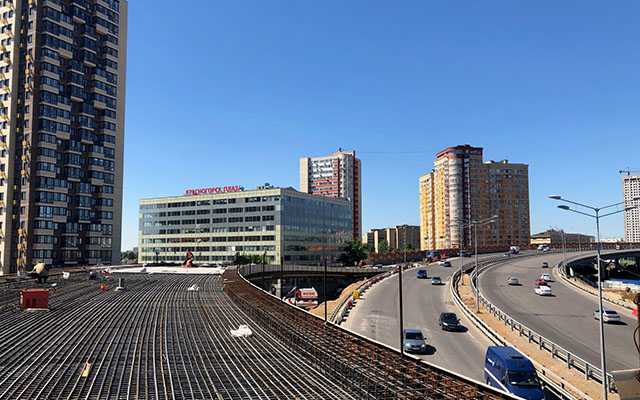 “We’ll have two loops opened in a month. The interchange will be completed before the end of the year. We have invested about thirteen billion roubles in this interchange,” the Governor said.

The project works carried out by JSC Stroytransgaz JSC are progressing according to and, some of them, ahead of schedule. The interchange is a three-stage project, with stage 2 and stage 3 works currently underway. The project is about nine kilometres long, its traffic capacity exceeding 80,000 vehicles a day.

At the end of 2018 construction of a new highway was completed and Governor Andrey Vorobiev opened working traffic in both directions along both overpass structures of the first and second start-up complexes. Construction of the right side of the overpass on the main transit flow of Volokolamskoye highway across the Riga direction railway lines, rearrangement of utilities and the Banka River bed rectification have been completed.

According to Alexey Gerzhik, head of the regional Ministry of Transport, two ramps will be opened next month. Scheduled for July is the commissioning of a bridge over the Banka, and in September a jughandle over Volokolamskoye highway will be put into service.

The multi-level traffic interchange in Krasnogorsk will help deal with the complex transport situation in the town by creasing the traffic capacity of Volokolamskoye highway both in the direction of Moscow and the region.