Transport Infrastructure: A Dialogue between Business and Government 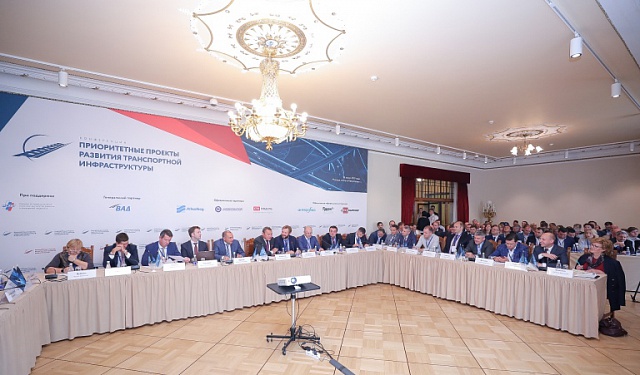 Moscow hosted a productive dialogue between the representatives of business and government authorities under the Priority Projects of Transport Infrastructure Development conference. The event was sponsored by the Russian Union of Industrialists and Entrepreneurs that includes STG JSC as a member. The company was represented by Irina Dumova, Director for Strategy and Business Development.

The discussion primarily focused on the prospects of Russia’s transport infrastructure development, including under the Comprehensive Plan for Backbone Infrastructure Modernisation and Expansion 2024.

The event was inaugurated by Innokenty Alafinov, First Deputy Minister of Transport of the Russian Federation, who said that the Ministry of Transport is currently drafting legislative amendments to shorten the standard timeframes for concession tenders. This is due to the central (in the First Deputy Minister’s words) obstacle to the implementation of national projects – a slow kick-off of such projects. Projects are discussed and prepared for a very long time, up to several years, which inflates the cost estimate and depresses the investors.

According to Dmitry Tvardovsky, General Director, VEB Infrastructure JSC, the intersections of utility lines, many of them unrecorded, are a major obstacle to the implementation of infrastructure projects. This has an adverse effect on the investment appeal of the projects by inflating the cost estimate and making investors reluctant to take such risks. According to Dmitry Tvardovsky, VEB.RF is currently considering several transport infrastructure projects that may be included in the Comprehensive Plan, specifically, the Central Ring Road and port infrastructure development projects.

Igor Koval, General Director, Russian and CIS, IC ICTAS INSAAT, claimed that the market of major infrastructure projects is still pretty narrow. The country has construction capacities and funds to implement these projects. However, it lacks well-designed and structured projects. Today, front-end engineering works that the regions are unable to perform due to (without limitation) the shortage of funds represent a major bottleneck. Igor Koval highlighted that the transition from discussion and preparation to actual implementation should be accelerated.

Irina Dumova, Director for Strategy and Business Development, Stroytransgaz JSC, invited the participants to develop a common stand in the dialogue and find an approach to interfacing with the authorities from the perspective of infrastructure contractors. Pavel Chistyakov, Vice President, Infrastructure Economics Centre, supported the idea and encouraged the other business representatives to bring up their ideas that could potentially be supported by the state and ultimately implemented. A little earlier during the business lunch, the RUIE and Maxim Akimov, Deputy Prime Minister, made the decision to create a register of infrastructure projects that are of interest to business, including in the form of private concession initiative. The projects and initiatives proposed by business that meet the national development goals are supposed to be discussed at a big transport forum featuring Maxim Akimov, Deputy Prime Minister of the Russian Federation, to be held in October 2019.

The RUIE Committee for Investment Policy, Development Institutions, and Export Support is continuing its efforts to develop the business initiatives and projects in the area of transport infrastructure development. Anyone interested is invited to bring up his/her ideas by sending an email to: sirotinau@rspp.ru