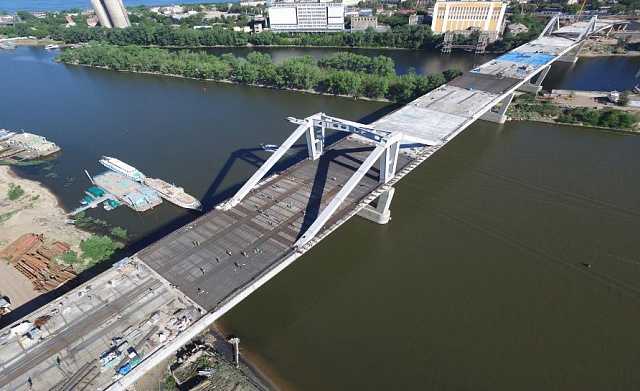 A historical event for the residents of Samara took place — the builders have completed the concreting of the floor slab on the superstructure of the bridge across the Samara River.  This bridge is the largest facility of the Frunzensky bridge crossing erected by JSC Stroytransgaz.

The concreting works were launched last December and were performed in 3 stages. The first elements to be concreted were the sections of the superstructure between the first and second, as well as between the seventh and eighth bridge abutments. Cold weather was unable to disrupt the works — special process enclosures were used for works at low temperatures. They were used to create a confined space above the reinforced concrete structure providing the required degree of thermal insulation from the outside. This technology makes it possible to create suitable conditions for concrete curing to the required strength.

At stage 3, the stream superstructure (between abutments No. 2 and No. 7) 597m long were divided into 13 so-called “work zones” (sections) to be concreted one by one. The concrete mix was fed by concrete pumping systems to a height over 20 metres and further on along the concrete pipe up to the concrete bed for a length up to 100 metres. To concrete the entire length of the superstructure (667 metres), the builders used over 5,000 cu. m of concrete.

Now they have to concrete the cantilever parts of the bridge. After the concrete hardens, the builders will do the waterproofing, asphalt and dress the road surface. The bridge is supposed to be opened for traffic as early as this fall.

Concurrently, the builders are working on the other facilities of the Frunzensky bridge crossing — junctions at  Frunze and Shosseynaya Streets and the motorway main traverse