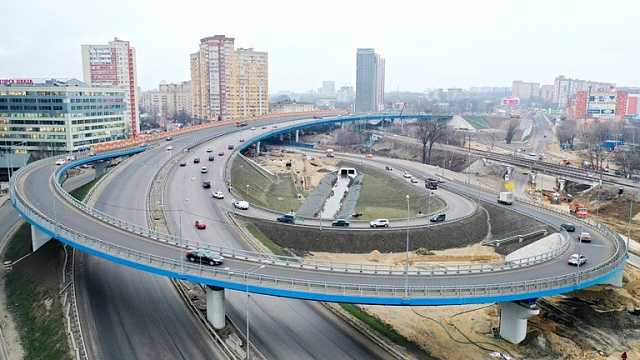 StroyTransGaz JSC completed the construction of the turnaround flyover in the area of the Pavshinskaya floodplain in Krasnogorsk. The activities were carried out in the context of the third phase of construction of a multi-level interchange at the intersection of the Volokolamskoye and Ilyinskoye highways.

The traffic along the flyover is one-way, the facility is 390 metres long. The flyover supported by 11 piers required 1200 tonnes of metalwork and 1240 m3 of reinforced concrete. The construction of the 3d start-up facility included the laying of 23,000 sq. m of asphalt concrete paving.

“The commencement of traffic along the turnaround loop will allow the residents of the Pavshinskaya floodplain to go to socially important facilities in the centre of Krasnogorsk without covering an excessive distance along the Volokolamskoye highway. In addition, the drivers who come from the Ilyinskoye and Volokolamskoye highways to Moscow will also be able to use the flyover. The facility will allow the driver to make an alternative turnaround towards the region and, without turning to the Moscow Ring Road, escape rush hour traffic jams. The facility will provide an easy approach to the new station MCD-2 ‘Penyaguino’ from the region,” said Aleksey Guerzhik, Minister of Transport and Road Infrastructure of the Moscow Region.

The interchange has been built in Krasnogorsk since 2016. In December 2018, the traffic started on both sides of the overpass over the railway tracks to Riga. In July 2019, the routine traffic started along the exits from the Volokolamskoye highway to the Ilyinskoye and Penyaguinskoe highways, and the access road to the railway station Pavshino was opened. The commissioning of new sections allowed an unhampered flow of traffic from the region to the Ilyinskoye and Novorizhskoye highways, reduced the traffic along the Volokolamskoye highway towards Moscow, and provided access to the railway station Pavshino where a large transport interchange hub will be built.

“Thanks to complex integrated transport solutions, in the last few years our district started breathing easily as the travel time decreased much; now the travel from one micro-district to another takes just 15-20 minutes,” said Elmira Khaymurzina, Head of Krasnogorsk City District.

The commencement of routine traffic on the third start-up facility will unload the transportation hub in the area of the Pavshinskaya floodplain on the Volokolamskoye highway.

In 2020, the project expects the completion of landscaping as well as the reconstruction of the Penyaguinskoe highway 500 m section.